Moroccan Tagine Recipes have exclusively used the tagine for centuries. A Tagine is a clay cooking pot and is used for all types of  dishes. They are one of the oldest forms of a pressure cooker. The Tagine pot takes all of the flavors from the spices and forces them into the meats and vegetables.

1. Recipes for Tagines – Chicken Tagine with Preserved Lemons and Olives This colorful Moroccan stew offers deep spices, but stays light and bright with tart citrus, briny green olives and fresh cilantro. For the most authentic presentation of this Moroccan Tagine chicken recipe, serve it on a platter or individual plates atop a bed of couscous. Recipes for Tagines
Check out this recipe This lamb tagine gets its vibrancy from spices like cinnamon, cumin, turmeric, and cardamom. If raisins aren’t your thing, swap them out for another dried fruit like apricots, tart cherries, or prunes – just chop them so they’re raisin-sized. You will want to make this warming, fragrant, tender lamb stew. Traditional Tagine Recipes
Check out this recipe Moroccan tagine is an easy to prepare, family-friendly medley of warm spices, tender meats, fresh vegetables, and dried fruits. Moreover, tagine (the stew, not the clay pot) falls squarely into what I like to call the New Comfort Food. With Ginger & Mint is an exotic, warmly spiced stew that is easy to prepare, family-friendly, and oh so delicious! Recipes for Tagines
Check out this recipe Fish fillets poached in a spicy tomato sauce, and an abundance of vegetables and chickpeas. This Moroccan Fish Tagine is the perfect topping for couscous, and it’s done in 30 minutes! Delicious and healthy doesn’t get any better! Studded with loads of white fish, rainbow peppers, and a lightly spiced tomato sauce, this Moroccan fish tagine recipe feels—and tastes—exceedingly fancy with zero fuss. Traditional Moroccan Tagine Cuisine
Check out this recipe 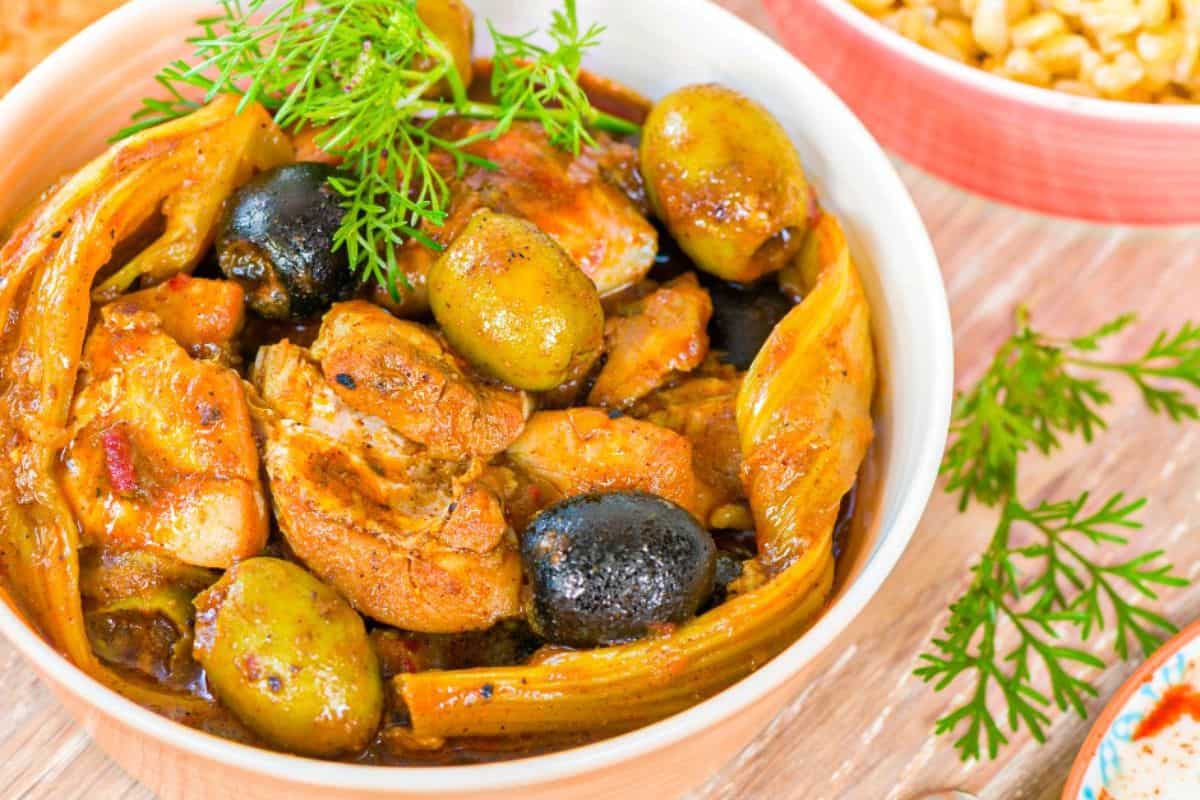 Plan for it to last multiple meals. Used skinless breasts. Cooked for an hour and it came out cooked and moist. The flavor is great. You can put whole garlic cloves in to cook with it, really deepens the flavor. Moroccan Tagine Recipes
Check out this recipe Tagines are flavorful Moroccan stews loaded with cooked vegetables and signature spices like cumin, coriander and ginger. This version is a wonderful opportunity for vegetarians to experience international fare at its best. Serve over couscous for a true Moroccan meal. Traditional Moroccan Tagine Dishes
Check out this recipe This flavorful Moroccan Tagine is made with chickpeas, caramelized eggplant, and a fragrant Moroccan spice blend called Ras El Hanout. It’s luscious and hearty yet totally plant-based and vegan. It can be made ahead, as leftovers get even more flavorful as the flavors have time to meld. Recipes for Tagines
Check out this recipe Tagine dishes get their name from the pottery dish with a cone-shaped lid in which they are slowed cooked to perfection. We tried a number of Tagine dishes while in Marrakech, Morocco. They run from savory to sweet with the addition of dried fruit and honey.
This version, Chicken Tagine with Apricots, Prunes and Preserved Lemons, is a blend between the two. The addition of the fruit along with a hint of cinnamon and mint adds a little complexity to the standard Chicken Tagine Recipe and Traditional Moroccan Tagine Cuisine.
Check out this recipe When I made this dish I left the kitchen window open. The smell attracted several male neighbors, and when my husband came in, he said that it smelled so good, he hoped it was coming from our house and not from someone else's! Serve with my Moroccan Couscous and Cucumber Raita. Moroccan Tagine Recipes
Check out this recipe Everyone loves North Africa’s deeply flavored tagine (the stew), but no one wants to make it because they think it needs to be cooked in a tagine (the earthenware cooking vessel). Not true!
This version is designed for a large enameled cast-iron casserole. Don’t be intimidated by the long list of ingredients either; it consists mostly of spices and easy-to-find staples that you will use over and over. Traditional Moroccan Tagine Dishes
Check out this recipe A simple vegetable tagine recipe packed with warm Moroccan flavors. One of my new favorite one-pot meals. Think of Moroccan tagine as a succulent, slowly simmered stew. Similar to this Moroccan Lamb Stew, the balance of sweet and savory flavors, coupled with the intensity of spices set this vegetable tagine apart from your average stew. Traditional Tagine Recipes
Check out this recipe A tagine is a slow-cooking stew and this lamb stew recipe gets its Moroccan flavor from a blend of aromatic spices such as turmeric, cumin, ginger, cardamom and cinnamon. Traditional Moroccan Tagine Cuisine
Check out this recipe Try this classic mix of spices, chicken, and vegetables. Add couscous for a great meal and a true Moroccan delight. Chicken tagine is a traditional Moroccan dish of chicken pieces braised with spices, garlic, onion, olives, and preserved lemons. It’s company-worthy yet easy to throw together. Serve with couscous or rice. Moroccan Tagine Recipes
Check out this recipe This recipe for Moroccan Fish Tagine with Chermoula and Vegetables is one of the most popular ways to prepare fresh fish in Morocco. First the fish is marinated in a zesty herb and spice mixture called chermoula, then it’s layered with potatoes, carrots, tomatoes and green peppers in a tagine for slow braising.
Traditionally tagines are cooked over a fire or charcoal in a special brazier, but these days it’s more common to see home cooks using a stove instead. Traditional Moroccan Tagine Dishes
Check out this recipe This slow-cooked chicken and chickpea tagine gets its flavor not from lots and lots of deep browning, but instead a gentle touch, a few key spices, and the natural juices of the meat and vegetables. Gentle heat and the natural juices from the onions and chicken are all you need for this simple yet deeply flavored stew.
Keeping the vessel covered during cooking traps that moisture, creating the dish's juices. Dried figs, pistachio nuts, and spices add layers of flavor and a mix of textures. Traditional Tagine Recipes
Check out this recipe Vegetable Tagine is a vegetarian Moroccan stew loaded with heady warm spices. Make this with any veg you have – just don’t skimp on the spices!! This is one of those hidden gems that will please just about everyone. It’s meat-free, gluten-free, low-carb, low calorie, vegan, extremely filling AND tasty. Recipes for Tagines
Check out this recipe There are also two different types of pots. One is painted on the outside, and one is plain. Do not cook in the decorated tagines. These are strictly for show.

Moroccan cuisine is influenced by Morocco’s interactions and exchanges with other cultures and nations over the centuries. Moroccan cuisine is usually a mix of Amazigh, Andalusian, and Mediterranean cuisines, with slight European (French and Spanish) and sub-Saharan influences.

Morocco produces a large range of Mediterranean fruits, vegetables and even some tropical ones. Common meats include beef, goat, mutton and lamb, which, together with chicken and seafood, serve as a base for the cuisine.

The staple grain today is wheat, used for bread and couscous, though until the mid-20th century, barley was an important staple, especially in the south. Grapes are mostly eaten fresh, as a dessert; wine consumption is only about 1 liter per capita per year.

The traditional cooking fats are butter and animal fat, though olive oil is now replacing them. Butter is used both fresh, zebeda, and preserved, smen.

Spices are used extensively in Moroccan food. Although some spices have been imported to Morocco through the Arabs for thousands of years, many ingredients—like saffron from Talaouine, mint and olives from Meknes, and oranges and lemons from Fes—are home-grown, and are being exported.

How to Use a Traditional Moroccan Tagine Pot

The Tagine pot takes all of the flavors from the spices and forces into the meat and vegetables. Many times fruit is also added to the vegetables. There are no recipes as such and each time the same cook prepares it they will probably differ in some ways.

If you do not own a Tagine Dish I would certainly recommend you get one. This meal can be prepared in a skillet or crockpot but the results will not be nearly as good.